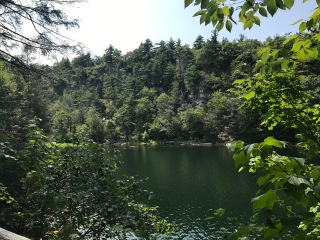 My husband and I have been talking forever about taking a drive to upstate NY and doing some hiking and camping. For the first time in a long time our schedules aligned and we decided to go up to near “Ellentown”, since he heard from friends it was very nice there.
After searching for campsites we found Sam Pryor Shawangunk Gateway Campground which is near the “Gunks”, the mountain area at the Shawangunks that is popular with rock climbers. We aren’t rock climbers but it appears that there are trails nearby in walking distance. We book it quickly worried that the sites will book up since it is one of the last weekends of summer.

To check in to your campsite you must arrive between 8-10 am or after 2pm. We made a mad rush to get there before 10 am and we just made it in time.
The sites are semi private. They say you can put two tents on your site but we don’t think we could have put more than one on ours. They are kind of small and you have to pitch within the wood designated area.

After check in it didn’t take us too long to set up our tent. They provide a bear proof locker for your food and toiletries. There are composting toilets and a sink not too far from us but if you want a shower it is a hike and cost $3 in quarters.

We put our sunscreen and bug spray on and head off to whatever hike is ahead of us.
Following advice of the campsite we follow the connector trail that takes us up to the Mohonk Preserve office. 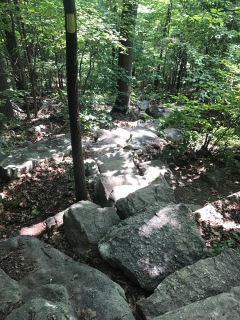 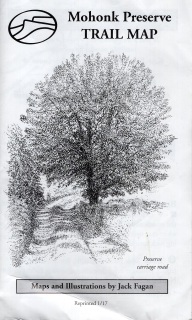 We stop in the vistors center, there is a line. We don’t feel like waiting and still really don’t know where we are going so just follow signs for a trail. Outside the trail there is a nice man who is collecting money for the Preserve. Hikers need to pay $15 for a day pass to hike the trails. You get a wristband to designate that you paid. He gives us some advice on what trails to try. We pay and start on the East Trapps Connector Trail. It is a stone path that connects you to the rock climbing cliffs and the other trails. We soon learn why the guy at the campsite called it the StairMaster. 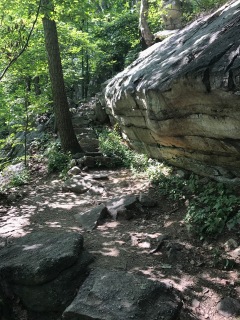 Soon we get to a flat trail. Upon the advice of the gentleman at the trailhead we go right.

Well I go right, my husband goes up further to walk along the climbers. I feel like I will just get in the way so I continue to flat trail below, hoping we meet back up with each other at some point.

I walk alone for a little bit. I take in the view of the valley.

At some point the trail begins to curve and I get worried since still no Carlos. Send him a message that the trail is changing direction. I look back occasionally but still no sign. Eventually he meets up with me and we soon come to a cross roads. We must decide which direction we want to go. We decide to go toward the private resort to get a view of the lake on property. The resort shares trails with Mohonk reserve. Hikers can use the trails but are not allowed to use the resort specific amenities such as the water and resort porch (we did use their bathroom though!).
As we walk toward the resort we get a very nice view of the lake.

We walk a little farther and we get a spectacular view of this resort in the sky. 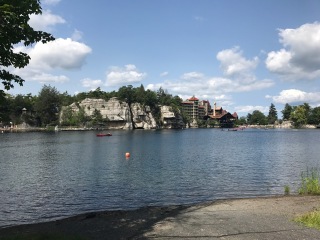 We sit on a bench overlooking the lake to fuel up on some snacks. I enjoy this much needed break. We dream of splurging at some point and getting a room at the resort. We later find the cheapest room is $600 a night.
After our snacks we try to find the trail again to circle us around the resort. We aren’t sure we are going the correct way but eventually end up at the Copes Lookout Road and at Cope’s lookout where we enjoyed spectacular views for a few minutes. 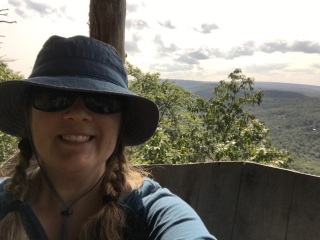 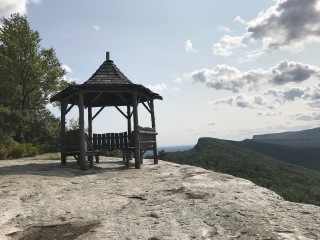 We had the lookout to ourselves the whole entire time there. I wish we would have brought a lunch to share on the ledge. Truly spectacular views.
At this point we were turning back toward the way we came. There were a number of paths in the direction we needed to go but we stumbled upon this wooded path called Giants path. Many of the paths we were on were nicely manicured flat trails. Giants path was not. It was down hill with lots of large boulders, following the blue marks. I started to regret this path, even more so when we came these larger than life boulders and a seemingly dead end. 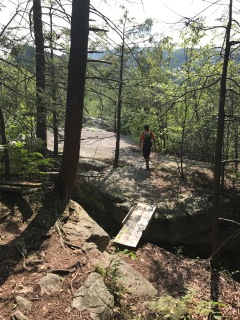 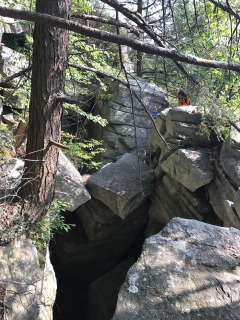 They couldn’t possibly expect us to traverse down this crevice? We evaluated the situation for a little while and Carlos attempted the path, talking to me as he descended. He was confused on how to move on and took each step with hesitation. While he journeyed on I looked for some sort of information on the internet (thank goodness for cell phone towers). I found a video where a mother and maybe a ten year old boy complete the obstacle. I am still extremely intimidated by it so I wander around and look for another way down. I can’t find any other path down. I see markers for a red trail but red is bad right? Why don’t they have a bypass route? Carlos gets to the bottom. He seems pretty far down there. I am still not ready. I watch the video once more. Carlos decides to come up to get me, maybe we will go back up the boulders to the safer trail? At that moment I decide to just do it. I move forward and start following the blue markers. I move swiftly until I get to a point where it is sort of a steep drop. I guess my choice is to slide down? That is what I do; but in the process hurt my knee and twist my good ankle (the other side has a long term running injury). I am injured but not dead. I keep going. I reach Carlos. He is surprised how quickly I made it to that point. I didn’t waste time making decisions, I blindly followed the blue. The area I meet up with him is sort of an open area off to the right seems to be another secret pathway. Already pushing my luck with this path I decide to stay away. However it looks like the kind of place where bats or vampires sleep for the night. We continue on out. Carlos warns me about bumping my head since he did so on his first attempt out. My hat blocks my view so I bump my head on the same spot as him. Now I have a sore knee, ankle and head, but I am out. I feel so accomplished. So proud of myself for conquering my fear.

A video journey of the Giant’s Workshop (what it is called).

I am beaten down so we walk back. 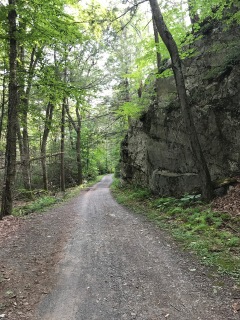 We decide to take the path back advised by the ranger “Overcliff Road”. He said was supposed to have great views. While it had at least one viewing area, it was mostly boring path that went on forever and ever. I was tired and felt like this path was wasting my time and energy stores. 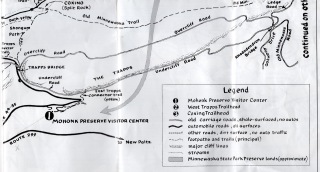 Finally as we turn back toward the vistor’s center do we come across some action.  We see pretty boulders and we get to watch the rock climbers in action. 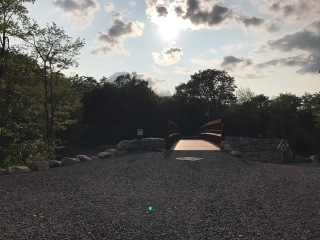 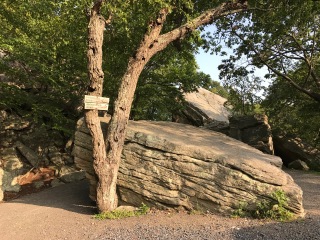 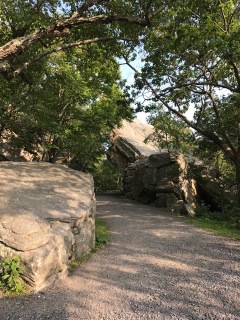 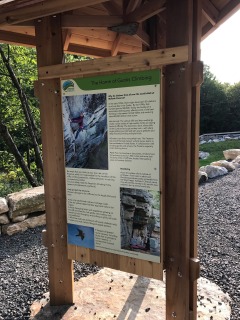 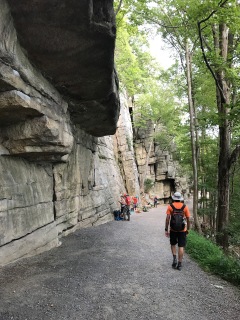 We have to head back the way we came, except going up the stair master, I stumble down the stairmaster. My legs want to stop but there is an older man with his little dog coming down behind me. I MUST NOT LET THEM BEAT ME. The treat of being overtaken gets me down the hard part. After our campsite connector, we are back. I exchange some dollars for quarters in the campsite office, thinking a shower is even possible at this point. Once I get back to the site, shower is not happening. 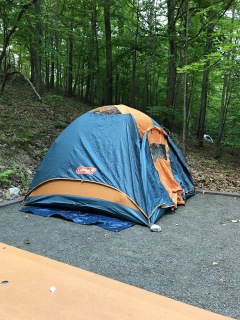 The only thing that is happening is sandwiches, sleeping, and this wine. 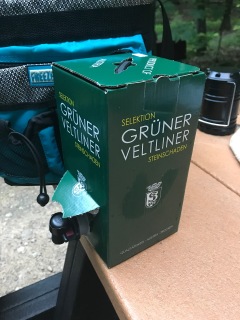 We retired semi early since once it is dark, there isn’t much to do if you don’t have a burner. Fires not allowed on sites. The campsite has a fire pit but there is no way I am walking back that way.
Time to sleep….zzzzz

One thought on “Hiking in Mohonk (Day 1)”