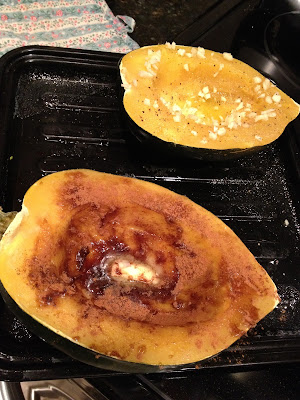 I made an awesome sweet and savory acorn squash from a recipe that I found on the internet. On the sweet half I omitted the brown sugar and star anise. The butter gives it the comfort food feel that will want you coming back for more; but leave it out if you want to reduce the calories a bit.

Some may have heard me complain on how inaccurate Map My Run has been at tracking my mileage and pace. At first it was real cute – especially when it would tell me my first mile was completed in 6 minutes (at best I can run a mile at 11:30 – and that is my 5K pace). I soon learned that my mileage did not add up correctly. I struggled through races thinking I was further than I was until I would see a mile marker that would slap me in the face again; My running group always had their GPS at another mile marker when I checked. I could have kept lying to myself but I really do want to improve my half-marathon pace and not just screw around. I really want this thing to work correctly. After using it for 10 months consistently I have finally discovered why it might not be working for me. I am too damn slow for it. The application cannot handle what I consider running (which is a combination of slow running and 1 minute walking intervals). Today I switched the setting to “interval” training and voila. My last training seemed much closer to the true pace and mileage. Hopefully this problem is resolved because I am in the home stretch to my next big race.

Months ago I wrote this post about happiness. Where are we today?
Stop at least one negative statement about a person place or thing. I can’t say that I have 100% stopped this behavior but I can say that I have gotten a hell of a lot better at controlling my negativity. And when I do let negativity slip out, I notice it right away and a few times retracted my statements in conversations. I have made much headway here and would like to continue this on.
Wear sunscreen daily.For many weeks I did this, then, I don’t know what happened. First it began as “I don’t plan on going in the sun today anyway” – in which case I ended up going into the sun 9 times out of 10. Now I don’t even think about sunscreen. I need to reset on this goal.
Cut some slack. I have made some improvement here, especially on the home front. I am beginning to sense when someone is just having an off day. I try to not engage in confrontation with them when they act in a way that I do not agree with. With some people it is more of a challenge than others but fortunately I continue to grow here.
Stop being judgmentalI have made some improvements as well. I received some interesting advice from a colleague a few months ago. He mentioned that he too has the tendency to be judgmental. He decided that the best way to conquer this notion is to embrace that which he is judging. He started approaching people he didn’t think he would like. He soon found that those people he had “pre-judged” were actually nice and interesting people. I have started using this approach on a small scale. I now say hi to people I would previously ignore. On a flight I was distraught when I realized I was seated next to a young family with an infant. I tried my hardest to ignore them, just knowing that the baby would be screaming throughout the flight. Sure enough, before we even took off, the baby started crying. A few minutes later she stopped. My fear was unwarranted. I ended up having a nice conversation with the lady. Opening yourself up to others will not only enrich their lives because you are showing a genuine interest in them but also because you are being enriched with knowing someone you didn’t know before.
Breathe and breathe deeply.
Stop being a debbie downer.This backfired on me a bit. At work I tend to be a problem finder. I see things that are going to go wrong before they go wrong. I most always call attention to these issues; and I am sure there are eyes rolling behind my back. Once I saw a problem, asked about it, was told it wasn’t a problem, it still didn’t seem right to me but I didn’t push the issue as I normally would. Big mistake. I ended up spending one entire weekend (day and night) trying to fix this issue that I “knew” could be a problem. The lesson here is to learn when negativity or conflict is appropriate and use it. In social settings it is ok to let things slide but in work I need to use better judgement.
Stop being a one upper.  This is another category where I have made big improvements but I can still grow more. I think it is more of a self-esteem issue and feeling the need to prove myself. I just need to remember that people like to talk about themselves. Let them do it.
Flossing- This is a better than before category as well. Am I ever going to get myself to floss every single day? Probably not. But if I can get myself to floss 4 times a week, that would be great.