Our local commuter service Sunrail started this week. They are providing free service for two weeks so I decided to take a day off to test how a commute might work for me.
Let me start by saying that I really want this train to work. I think Orlando (Central Florida) is in desperate need of some public transportation options for many reasons. Some reasons include to reduce traffic, to provide transportation for those who can’t or don’t want to drive, and to have the city be “greener”.
That being said, I am not sure the Sunrail is my solution. I am what one would refer to as a reverse commuter. I already live in the city limits and my office happens to be outside of the downtown vicinity in a suburban office park. This train was obviously made for people who do the opposite of what I do (live in the suburbs and commute downtown).
There is no train station in walking distance to neither my work nor my home. And any bus connectivity would require at least a mile walking on either end (acceptable) and up to an extra 2 hours added to the commute (not acceptable). Because there is no shuttle bus capability my only option is to do a bike and ride option. The bike and ride option is what I tested out today.
I started bright and early from my home in Baldwin Park a little after 6:00 am. I should have left a bit earlier to catch the first train but I couldn’t quite get out of bed early enough.
I pumped up my tires to the required pressure to make sure they were ready for the commute.

I turned on my bike lights and headed down the route to the Florida Hospital Station. There are two train stations almost equi-distance from my house. I just chose the Florida Hospital one for this morning’s commute because I have yet to see the station. Of course rain is coming later in the day so I decide I need to get this commute over with early.

Since I have biked the 4 mile route to the general area of the station before, it was a relatively event less ride. 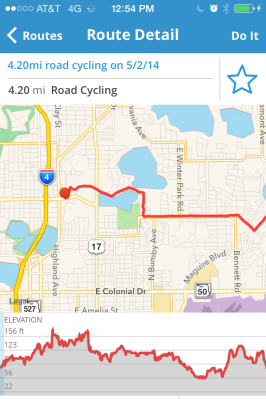 The station was nice but relatively empty. I didn’t have to wait too long for the train to arrive. 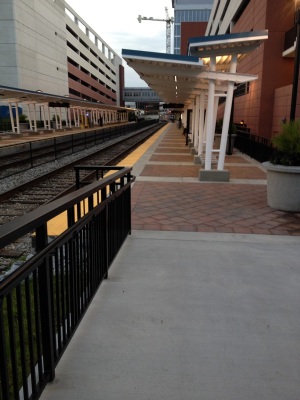 Luckily the train northbound was not full. I had plenty of room for my bike and myself. I attempted to strap my bike in but it was awkward and I was afraid if I fully locked it in, I wouldn’t have time to unlock it at my stop. Unfortunately it ended up falling over twice – even once after I thought I correctly strapped it in. Maybe this will be easier with practice. 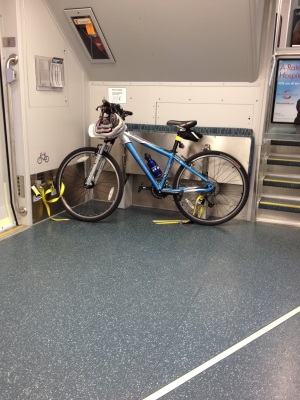 The train is very clean and pleasant. My stop is two stops away. I forgot to time the journey but it couldn’t have been longer than 15 minutes. Upon arrival I easily removed my bike and got off the train.

At this station I notice there is a place for bus pick up but no bus. It would be really convenient if there was a bus to take me the rest of the way. 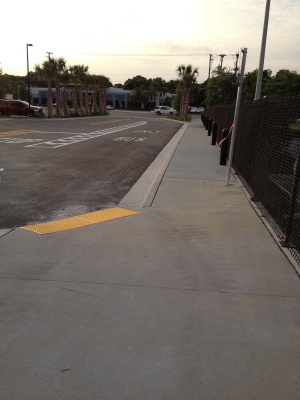 I biked the rest of theway instead, and the safest route is a 4.5 mile route that back tracks to go around interstate 4. 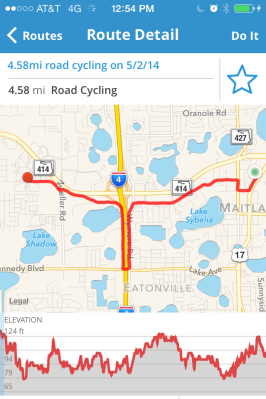 There is a more direct route but it is super scary. You are basically traveling over a highway-type road with no bike lanes, no sidewalks and cars moving at very fast speeds. No thank you.
I chose the scenic route. The first part of it, Sandspur Road, was a easy but bumpy ride. However the bike lane only runs down one side of the road. What? On the way back I ended up taking the sidewalk (I know sidewalks aren’t safer but it relieves my anxiety on having pedal fast to not hold up traffic behind me).
After my turn on Wymore Road, I discover there are no bike lanes. Thankfully the lanes are wide enough that I am able to safely ride with the flow of traffic.
After crossing under I-4 I start my way toward the office buildings on Lake Destiny Drive. There are many problems with the road. There are bike lanes but the paint is worn on most of them so drivers might not be aware they exist. The lanes are poorly maintained: weeds grow into the lane, parts are broken up, tree debris exists in them, and at one point the lane fully disappears due to weeds.

Now you see it.

And someone decides a dumpster can hang out in the lane…

However it is not all bad. There is a cute .10 mile trail. 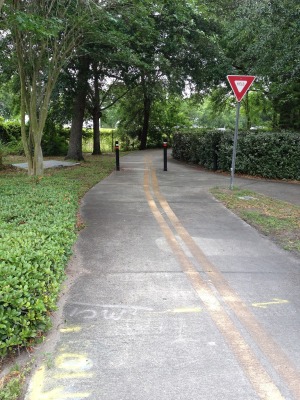 There is some bike signage.

And there is even a cross walk at some point.

I finally see my office in the distance.

I arrive at the office. At this point I would lock up my bike and go shower upstairs (luckily we do have showers). However today I just enter the building to bathroom and refill my water. Plus I text my co-workers to let them know how sweaty I am.
I head back to the station to take the train home. But alas I am 5 minutes too late. The last morning train has just left and the next one does not come for two hours. But it is only 8:29 am! I am sure that made sense to some train planner but it makes no sense to me. Don’t you think people will still be commuting in the late morning? Are you really saving that much by eliminating trains every 30 minutes mid-day? What about people who want to commute to lunch? I guess that is not possible.
I don’t want to wait around two hours so I head down 17-92 to go home by bike. I am tired and do not wish to ride with traffic so I sidewalk it. Parts of the route are nice. I got to ride by Lake Lily Park and see some great views there. 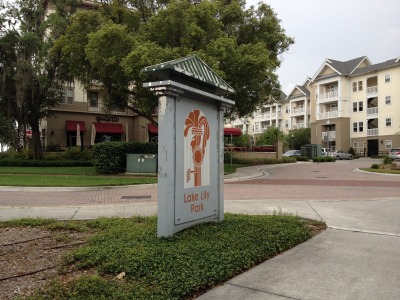 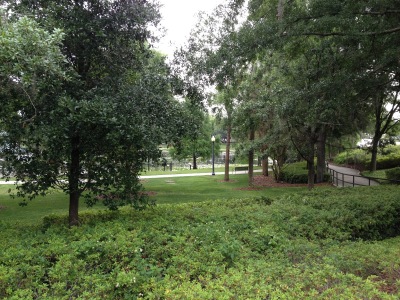 I skipped breakfast to get to the train early so I decide to stop at wawa to get a breakfast sandwich and coffee. Then rains happens.

Luckily it is only a light drizzle all the way home. I guess I got lucky with the overcast skies; it could have been a whole lot hotter.

My bike commute experience ended up taking approximately 64 minutes to get to work (49 minutes by bike, 15 by train). My normal driving commute averages 25-35 minutes. My bike back home from the “work” train station took me 51 minutes (part of that was a stop at the ATM).
What have I learned from this experience? I learned that it might be easier than I thought to just ride my bike to work from my house. The route includes more sidewalk riding than I like but it is doable. Maybe one day a week and a shower at work?
One thing I have proved is a time saving/convenience argument is not going to get me to take the sunrail. If I choose to ride it now, it would be purely a exercise/tree-hugging hippie argument for me to take it. Or I could be forced into it when I-4 construction begins sometime soon. What I want to happen is that the Sunrail planners add in a shuttle at one end of my commute (preferably the work end). This would lighten the commute by bike. Only time will tell what route I will take in the future.

2 thoughts on “Testing the Sunrail Commute”