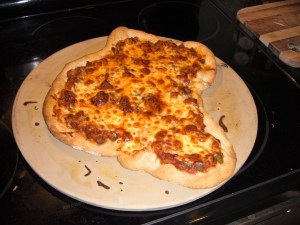 I am a pizza freak. If unrestrained, I could eat pizza for breakfast, lunch and dinner. I have been talking about making home-made dough for a while now. I decided to try making pizza from scratch about a week ago. My goal is to come up with a dough recipe that uses alternative grains such as buckwheat and to possibly eliminate the use of yeast in the recipe. However for this pizza, I used the tried and true whole wheat pizza dough recipe that is in the The New Basics Cookbook by Julee Rosso. It was not a difficult recipe to follow. We love to make our own tomato sauces so the pizza sauce is a variation of the spaghetti sauce we normally make. 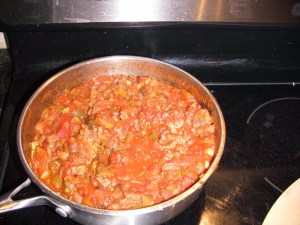 The following ingredients were used in sauce:

Final Notes
The pizza was quite good but the dough was a little thick and crunchy. The dough recipe allows to make two pizzas. The extra dough can be stored for a day or two in the refrigerator as long as it is covered. For the first attempt, I had preheated the pizza stone. I did not do this on the second pizza. Additionally in the second attempt, I used a rolling pin to flatten the dough to make it look more pizza like and to even the dough throughout. Finally, in addition to the mozzarella cheese, I added some grated cows milk cheese that I purchased from whole foods. The cheese had a similar taste to a parmesan. While I enjoyed both pizzas, the second was definitely better. Sorry I did not take pictures of the latter because we were rushed to eat it before a Broadway show.