As I mentioned before I was happy to leave Baden-Baden a day earlier. Besides the bad service it wasn’t a terrible place but there are so many better places to visit. Vacation time is short.
I booked the train tickets late but this time we didn’t have to pay for 1st class. However somehow I was only able to pay for a seat reservation and not the full ticket online. I have no idea how I did that and kept trying to figure out how to buy my ticket online when we already had a reservation. Never figured it out and ended up buying the train tickets at the station the next morning. Our train stops in Mannheim where we switch to another train to Munich. Besides having a hard time finding our car (even after thinking we mastered the system) the trip was pretty uneventful until the end.
After a while I noticed we started making Munich stops so it was time to gather our things. We slow down to the station and Carlos starts to leave with his backpack down the aisle when somehow the belt to his backup that was hanging down got trapped in a seat. He paused to pull it out but it was just stuck. I tried to pull on it a bit and it would not budge. The doors opened for the station and we started to panic. A few others attempted and it was not moving. I decide I need to run to the doors and ask them to hold since we are stuck. I was too late, the doors had shut and there was no opening them. At this point I was OMG we missed our stop (which at the time seemed like a really big deal but in the grand scheme of things probably not). The train started moving and I realize it wasn’t our stop, our stop was actually next. It bought us some time but that belt was not moving no matter what new strategy we imposed on it. Carlos tries to clip it with his nail clippers but it is too tough. Another passenger starts looking through her makeup bag for makeup scissors. She finds a pair. Another guest cuts and Carlos is free, with a slightly broken backpack now. Just in time for Munich Hauptbahnhof (the main train station). After all that drama we exit the train and joyfully walk a couple blocks to our hotel to unload.

Since we waited too long to book our hotels we missed out on some money saving opportunities closer to all the tourist spots. We chose instead to book the well maintained and decorated Arthotel Munich. Arthotel is a art themed economy hotel near the train station. Throughout the hotel there is modern art decor and many doors are painted with pictures of artists and other famous people. We stayed in the Elvis room for our stay. I didn’t love the part of town we were in since it was a little of a walk to the tourists sites but it was clean, friendly and good value for the money we paid. 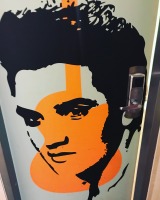 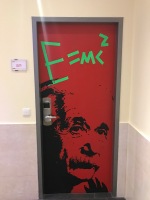 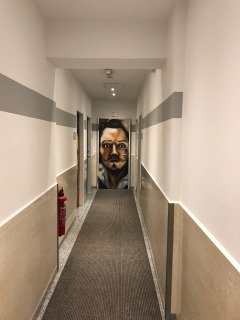 Normally I am very educated on what a city has to offer and make lots of notes on choices of activities while we are there. For Germany I did the bare minimum. I had too many distractions leading up to the trip. When we arrived in our room we started doing a little Rick Steves research in our guide. There were two beer tours we could possibly do that afternoon. Not a lot of preparation needed for that so it was right up our alley. Of the two tours one was strictly a beer one and the other was a beer plus German food tour (BAVARIAN BEER). We decided to take the beer plus food one so maybe we can look like we weren’t lushes that didn’t desire to know anything but beer. Against my better judgement I took the advice in the book about just showing up at the train station to book and the tour was sold out (Bad Rick Steves!). I could have easily booked the tour from the hotel before we left. The guy at the desk tells us that sometimes people do bail out last minute and we could come back before the tour starts and see if they have a last minute spot for us. We still have an hour to wait so we sit on the steps of the train station. We think about trying to make it to the other tour which starts a little further away but we decided to sit and wait. Closer to the time the tour starts there is another couple waiting standby. The odds aren’t good we are going to make it in. Groups slowing trickle in but when it is time to start 4 people still haven’t arrived. The person at the desk lets us in the tour. We pay as the tour guide hands out beers outside the train station and starts giving us some background info for the tour. While we are standing there the missing 4 appear but luckily we get to stay in the tour. That was a close call. Moral of the story if you know you want to take a tour, book it right away. (We did that for the tours scheduled the next day).
The tour starts with a beer and some background info while we are still at the train station.

The tour is an active tour that utilizes public transportation to get around (no huge AC tour buses). We together walk to the metro and take it to our first location the Beer and Oktoberfest Museum

Our guide takes us in for samples and intruduces the different beer styles and tells us about the German Purity Beer Law. 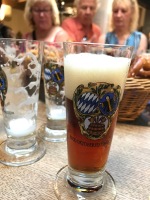 Some pretzels to soak up the beer 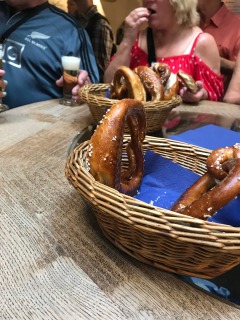 After our beers our guide took us through the museum where he explained about the history and what some of the symbols were. 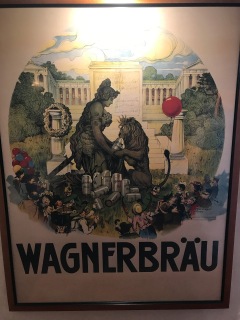 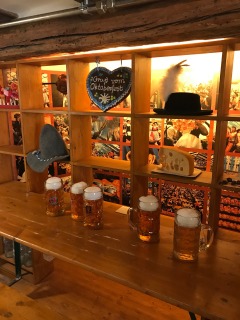 Next stop was a visit to the HofbrauKeller beer hall where we sampled some German sausages and other goods.

This special sausage is specific to Bavaria and is primarily eaten in the morning. Weisswurst is made from veal and pork and was very good with the sweet mustard we ate with it.

The tour guide also explained the significance of the maypole and how mischievous people steal them and use them to barter for beer parties. Each sign represent what services the town or area provides.

Finially we end up the tour outside the famous Hofbräuhaus. We did not go inside at that point but the tour guide told us about the experience inside and the history of the building. 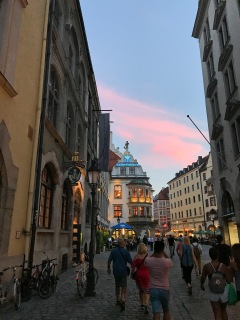 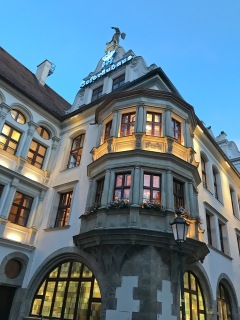 After the tour it was late and we decided to wander back to the hotel area. After a couple of beers I thought I wanted to stay out a little longer but after getting lost, since it was our first night in the city, we were both exhausted and just tried to find our way back. 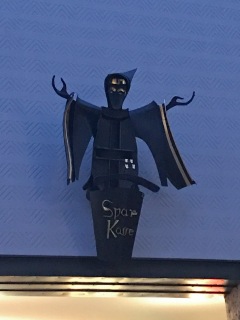 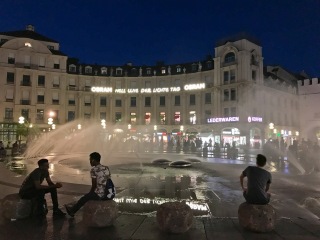 Plus we needed rest for a long tour day the next day.